• The most ambitious project in the 13-year history of Babylon 5 Books
• One creator, eleven experts and a span of eight years to complete
• Available in your choice of Online Multimedia Edition or 2-Volume Hardcover Color Edition or both in a money saving bundle.


Babylon 5 Stars' Crazy Way to "Open" a Babylon 5 Encyclopedia
5,000 entries from 160+ canonical sources
For the first time ever, the whole canon of Babylon 5 has been assembled into a single document. You will be shocked at how much you don't know about the Babylon 5 Universe.

DETAILS ABOUT THE SIGNATURE
A special type of paper was bound into the front of the book. Specifically the paper is a 68# heavy-weight (but still pliable), ebony paper stock.

We choose this particular paper stock because it looks especially cool in black. But more important is its durability: it is hard to tear or crease.

Straczynski signed each book with a metallic silver Sharpie pen to contrast the black, and to match the silver on black cover design. Using a metallic Sharpie will also prevent the signature from flaking or cracking, preserving it indefinitely. Sharpie metallic ink pens are more like a quality "paint" and literally has to dry after signing.

THE PROCESS TO GET TO THESE 5,000 ENTRIES
Phase one: Build a concordance of the entries
A list of initial entries was devised by careful study of the as-broadcast teleplays (in consultation with the DVDs and, on some occasions, the broadcast versions) of all 110 Babylon 5 episodes, the five B5 TV Movies, the 13 produced episodes of Crusade (as well as the three scripts in pre-production at that time of Crusade's cancellation), The Legend of the Rangers and The Lost Tales.

Phase Two: Find Additional Entries and Details Through Supplemental Sources
The initial list was augmented after examining the novels, comics and short stories deemed canonical by JMS, as well as additional material produced by Babylon 5's producers (The Official Guide to J. Michael Straczynski's Babylon 5) and writing staff (Larry DiTillio's Alien Guide), and merchandise (Dining on Babylon 5, the Babylon 5 Collectible Card Game, the Official Babylon 5 Magazine) that was vetted by Babylonian's reference editor, Fiona Avery. Additionally, an editorial database of 104,892 screenshots was created from the DVDs for cross-referencing.

For example, "Anla-shok" is spelled no less than four different ways (Anla-shok, Anla-Shok, anla-shok, Anla'shok) in the scripts, so this step of the process catches typos and ensures that every noun in Babylon 5's massive universe is consistent throughout the Encyclopedia's equally massive text.

The second step of the fact check process involves verifying each described event against the DVDs, scripts, novels or other sources as needed. For example, the "Cole, Marcus" entry mentions that the Cole Mining company was nearly bankrupted by the Earth-Minbari War, which was verified on page 57 of the original Dell printing of the novel To Dream in the City of Sorrows

Phase Four: Approval from The Fan Council
A committee of hand-picked mega-fans known to the Babylon 5 community will review each entry for thoroughness.

We call this extra-canonical data and it includes information from script drafts, cut footage and production documents. Here's one example –

The video above contributed to these two entries:

Keffer, Warren
Keffer trained under Ray Galus at the academy and won Star Fighter status. He first saw action intercepting raiders outside the Orion Belt, and received top marks from every commander after earning his wings. On 2 April 2258, Keffer flew against raiders in defense of the Tunguska. Early in 2259, Galus gave Keffer 95–100% in every category of his quarterly performance analysis and recommended Keffer’s promotion to lieutenant.

Rafelli
A Human Earthforce Starfury pilot and member of Zeta Wing stationed aboard Babylon 5. In his first quarterly performance analysis of 2259, Commander Ray Galus stated that Rafelli was a decent pilot but had not demonstrated any leadership ability. It was recommended that Rafelli not be considered for promotion until he logged another 100 hours of flight time.

The Babylon 5 Encyclopedia contains every notable, canonical fact in the Babylon 5 universe.

DO ALL 5,000 ENTRIES HAVE AN IMAGE?
No, but only because not every entry has a visual representation. For example, a character only mentioned in dialogue or who appeared only in a novel or short story – such as G'Kar's daughter G'Ryka – does not have an image but does have an entry.

That said, most entries in the categories of aliens species, characters, locales, organizations, ships or technology have a visual representation. There are 1,474 images in the full-color print edition. The multimedia online edition has more than 2,000 images in addition to 1,000+ videos.

These photos and video are in addition to the images of the ships and planet we had re-rendered in 1080p, high definition from the original files. Fans have never seen B5 like this before.

WHAT ARE THE SPECS OF THE 2-VOLUME HARDCOVER COLOR EDITION?
Trim Size: 8 x 10 inches. These books weigh about 3.5 pounds each (1.58kg) and this was the best size to keep the weight evenly distributed for extended reading.

WHAT ARE THE ADVANTAGES OF THE 2-VOLUME HARDCOVER COLOR EDITION? 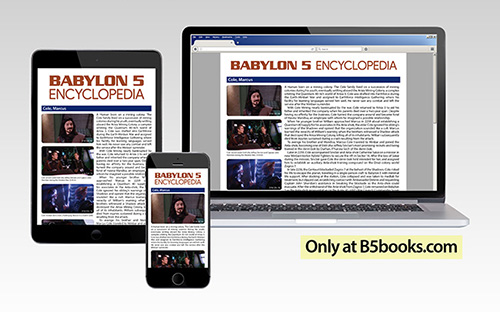 WHAT ARE THE BENEFITS OF THE ONLINE MULTIMEDIA EDITION?
• Pay once, access forever
• Pinch and Zoom images
• Over 1,000 entries feature video related to the headword. These videos are in addition to the high definition CGI sequences fans have never seen before.
• Production notebooks for selected episodes. Production notebooks catalog the behind-the-scene reports and documentation including shooting scripts.
• Over time we will also be including convention video from when the show was in production as well as tons of behind the scenes photos.
• Searchable
• Continually updated
• Portable, always have it with you via tablet, phone or connected computer
• All entries are that contain other headwords are hyperlinked that entry.
• No shipping charges, tax or VAT.
• Takes up less space/weighs nothing
• View entries alphabetically, by episode or by category (aliens, ships, etc) or by source (example: all entries from Babylon 5 novel "To Dream in the City of Sorrows".
• Exclusive B5 trivia, word search puzzles, crosswords

The Multimedia Edition is everything in the print edition, plus tons of bonus content. While the Print Edition is 100% canonical, the online online edition is canonical plus behind the scenes.

There is so much bonus, behind-the-scenes content it could take a couple years to get it all loaded in.

WHAT IS THE DIFFERENCE BETWEEN THE ONLINE MULTIMEDIA EDITION AND AN EBOOK?
By definition, an eBook is a standalone document small enough to fit on an eReader or tablet that doesn't have to be online, except to initially download it.

The Online Multimedia Edition of the Babylon 5 Encyclopedia is an online database of more than 5,000 entries that incorporates video, audio, images and documents mounted on a platform that far exceeds the memory and processing power any device a consumer would own.

DO I HAVE TO PAY A MONTHLY FEE OR UPGRADE FEE AT ANYTIME?
Absolutely not. Pay once, access the Online Multimedia Edition of the Babylon 5 Encyclopedia for a lifetime. The online edition is being hosted by Cablan.net which is owned by a Babylon 5 mega-fan. We have pre-paid the first 10 years of hosting.

HOW MANY DEVICES CAN I ACCESS THE ENCYCLOPEDIA FROM?
As many as you own. We monitor Internet IP addresses to make sure there isn't any password sharing. We don't limit the devices because we know so many fans have multiple tablets, smart phones and computers. For those who don't have fixed IPs or use public WiFi, know that one-off logins from different IP addresses NOT trigger. It's when our security software sees Dubai, Denver and San Diego in the same day that will flag your account.

CAN I SHARE MY PASSWORD WITH MY KIDS / SPOUSE / SIGNIFICANT OTHER?
Yes. Your license is for a household and/or family (and we accept all definitions of the word "family").

WILL THE ZATHRI OF BABYLON 5 BOOKS BE MAINTAINING THE MULTIMEDIA DATABASE?
Yes. We think of the online edition as a living, evolving entity. Any future Babylon 5 material would be included. Pay once, get upgrades forever.

HOW WILL I KNOW WHEN THE ONLINE MULTIMEDIA EDITION HAS BEEN UPDATED?
We will let you know via email or push notifications.

WHAT'S YOUR INCENTIVE TO KEEP THE ONLINE MULTIMEDIA EDITION UPDATED IF I ONLY PAY ONCE?
Our raison d'etre is to archive one of the greatest shows in television history and evolve that archive at every opportunity. We are a business, but we think of ourselves as historians as well. Nothing thrills historians more than sharing a new find. And we are finding stuff all the time.

CAN I DOWNLOAD THE ONLINE MULTIMEDIA EDITION?
Yes and no. It is meant to be consumed online. Technically, you can take a screenshot of each page for personal use offline, but with one entry per "page" that would take forever. This is in part why we are offering the 2-Volume Hardcover Color Edition as well, for those moments you don't want to be in front of a screen and want a more traditional reading experience. Think of the 2-volume set as your "downloaded" version.

WHERE DO I ACCESS THE ONLINE MULTIMEDIA EDITION?
Via a password-protected website. This is a browser-based multimedia platform that can be accessed by any computer, tablet or phone and will be properly formatted for that device.

ONLINE ACCESS GUARANTEED FOREVER
When we first launched a few fans expressed concern about the Multimedia Edition disappearing one day. We now have a solution so that doesn't happen.

First we have pre-paid 10 years of hosting at Cablan.net. All Babylon 5 books team members (most of whom are under 42) have the passwords and daily backups at the ready. These Zathri have permission to give folks who ordered, access to the files and/or put them back online if the site should go offline for any reason.

Frankly we can't think of a scenario where this would/could happen for the online, Multimedia Edition of the Babylon 5 Encyclopedia, but, frankly, we've had it happen to us, so we are happy to provide peace of mind.

WHAT IS YOUR REFUND POLICY FOR THE ONLINE MULTIMEDIA EDITION?
Spend as much time as you like exploring the Online Multimedia Edition of the Babylon 5 Encyclopedia. If it doesn't meet your expectations, email us at help@b5books.com and we will refund 100% of what you paid.